skip to main | skip to sidebar

ok - we have been so busy that finding the time to write is not so easy.

Today is our last day and we are heading out to Jazmin for the morning - hoping to be able to finish what we can there. Yesterday we were there with only 4 of the guys - Wilson and 3 others and we got a lot done. More on that later.

I also have loads of pictures to upload but that's also not so easy.....

One small thing I should report - I have at least 28+ flea bites on my lower left leg and 21+ on my right leg. In fact there are so many I could go dot to dot and have an entire farm scene on my leg. Or better yet - I have the little dipper, the big dipper and at least a couple more constellations down there!

All I can say is yuck! Red dots everywhere....very attractive. But I have now been wiping my legs with Bounce Dryer Sheets - yes Bounce!- and I haven't gotten any new ones...Just makes you wonder what kind of chemicals you are walking around with on your clothes if you use those sheets in the dryer!

We are leaving here at 5:00 tomorrow morning - getting a ride with a guy from the hotel - Hector - to the airport. He speaks English so I made him promise he'd wait with us to make sure we checked in etc as I speak no Spanish. Actually I am surprising myself and am actually getting some of it - osmosis? not sure, but am feeling a little bit more comfortable with the language....if only this was French or German speaking.

Anyway - from San Pedro Sula we head to Miami, to Dulles (Wash DC) and then to Burlington. We'll arrive late Thursday night and I bet our luggage doesn't make it...but rather lost on the way home than on the way down here.

Can't wait to see everyone! Business as usual on Friday!!
Posted by lws at 5:07 AM 1 comment:

Today was our day off....we went on a boat cruise to Punta Sal and on the way went down a river where we saw tons of different birds.

We saw some guys fishing - actually crabbing. They sat traps with fish pieces, then drop them to the bottom and end up catching crabs in the netting. Pretty cool. We stopped on of them and asked him to pull along side our boat and asked him to show us his catch - he had a huge rice sack full of crabs that he said he was going to see for 3 Lempira each) that's about 15 cents!

Just down the river we stopped at a village called, of all things, Miami! Who knew we'd go to 2 Miamis this trip! It is a Garifuna village right on the beach - we got some great photos!

Then off to the rainforest where we hiked around - we saw baby jaguar footprints on the beach and plenty of monkeys high up in the trees. No howling this year.

Off to a remote beach for a swim and a soak in the sun - just the most beautifully clear (and clean!) water. And thankfully this year no coral stings.

Back into the boat for lunch at another Garifuna village - Scott got the back end of the fish and I the front, with rice, beans and fried plantains. No hot sauce, though - that was a bummer. Scott also had a coconut for a drink - I stuck with a 7UP.

Eventually we headed back to Tela - and on the way we say a school of dolphins. The boat driver was reving the engine and it was making them all line up next to us and jumping out of the water. Every time we tried to get a good photo our cameras were just not fast enough - so it looks like we got pictures of lots of sharks with their fins just above the water!

Change over day. Today everyone who got here last Saturday (or Sunday) is going home. They left the hotel around 10:30 so we hung around until they left so we could say goodbye.

Scott worked on his Science project on my laptop while I worked on the hotel laptop. We were both grateful to get a moment to catch our breath and relax a little. We also got a chance to walk around town a little bit – I went back to my Diet Pepsi person and enjoyed every last drop. All I have been drinking is liters of water and beer…let me clarify – liters of water and a beer or two – NOT liters of beer!

After the 2 vans left we walked down with Liz, Mary and Sally to see the container. It had finally arrived and was being unloaded into a storage unit. It was a Chiquita Banana container that (I think) was donated. I’ll have to check with Norm on that one. By this time it was really getting hot so Scott, Liz and I decided to head to Telemar for the afternoon.

It took us about 15 minutes to walk there and it was well worth it! We had to wait in line behind a car waiting to pay to enter the grounds. It was 150 Lempiras per adult and 100 per child – they gave us a blue armband and a coupon worth the same amount to use at their restaurants for food or drinks. We headed straight for the beach. It was huge compared to the one by our hotel. We rented chairs – YES! So comfortable. Scott went in for a dip while Liz and I just relaxed – it felt soo good!

Lunch on the beach – a hamburger (I haven’t eaten one since I saw Fast Food Nation) which was made Euro-style with breadcrumbs – it tasted delicious!

Then Scott decided he wanted to ride at ATV on the beach. They were renting them - but the deal was that HE had to negotiate the deal! So he walked over and started the gesticulation of negotiation.

Then he walked back over to me - unsure if he had indeed negotiated the correct deal. I gave him some money - 100 lemps (abt $5) and he went back over.

I could see him kneel down - flatten the sand with his right hand - making a flat place to write in the sand. And that was his negotiation:
15 min
100 Lemps

Done. Deal. He got on the small ATV, had a mini lesson and off he went. And just as he started his back on forth on this ATV, another child came cruising by on another ATV - it was the biggest thing I had ever seen - huge pumped up wheels and the child atop this beastly machine was probably half of Scott's size.

I wish I had been able to pull out my camera in time - because the image of Scott on the smaller ATV and this small child on the HUGE ATV made me laugh so hard tears were streaming down my face.....
Posted by lws at 5:07 AM No comments: 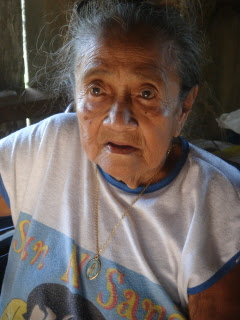 Juanita's house - look at her view! 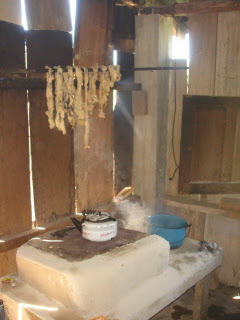 This is her stove - we think that's pork rinds being smoked hanging above. 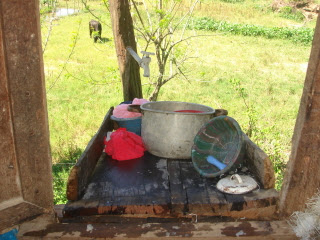 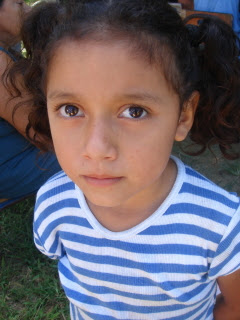 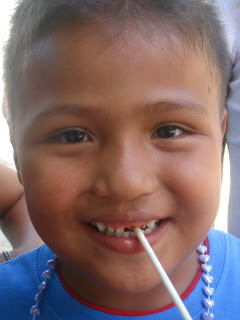 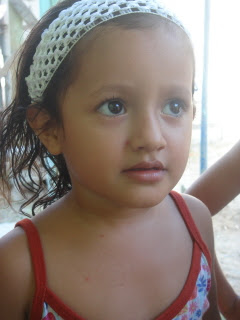 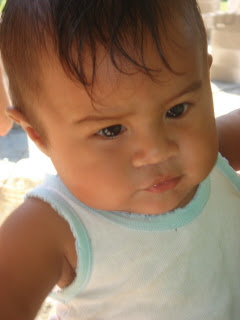 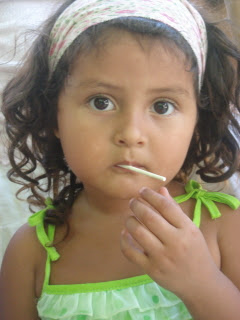 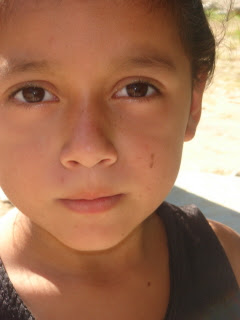 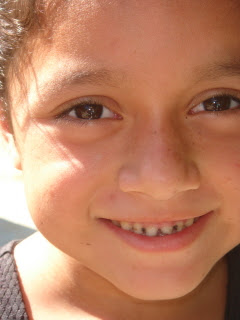 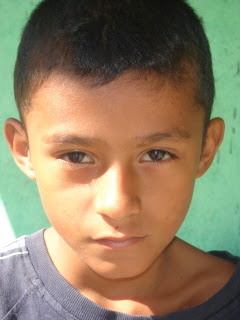 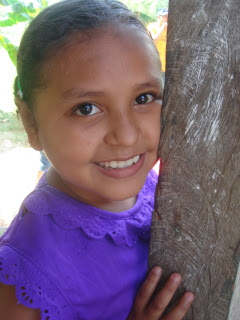 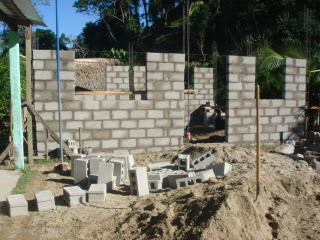 Day one - this is what the NEW school looked like when we arrived there on Thursday morning!
Posted by lws at 5:07 AM No comments: 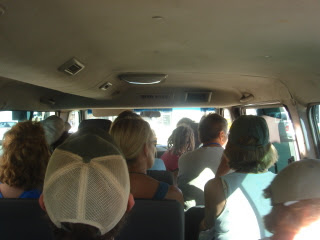 Today we worked at Jazmin. It was a drive - abt 30 km - and I was in the back seat of the van, middle seat....not the most ideal of seats but it was ok. We were 16 in all in that van. Anyway, we got there and all we saw was a one room school house (painted green) and a thatched roof open space which was the second classroom.
70 children go to school here - it is so hard to believe that they can all fit! So the job here is to make another room - a free standing new building to accomodate more children. 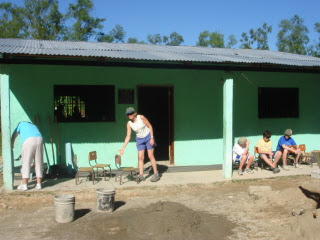 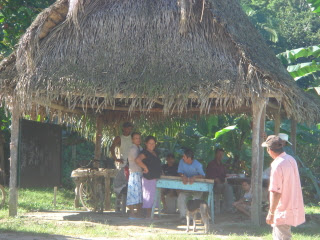 Around noon I went with Linda, Dave and Colleen to see this woman Juanita who lives about a mile down the road from the school - the mission was to deliver her a wheelchair. Wait until you see the pictures of where she lived! She was in a plastic garden chair because she had a broken femur and a yucky long term infection at the bottom of her leg. She moved around in her little shack in this green chair. Dave wheeled in the wheelchair and she got herself right into it and was all smiles, She finally had some mobility and a much more comfortable chair.

Colleen and Linda gave her a framed picture of the family who donated the wheelchair - the daughter had Down's Syndrom and had died last year. How amazing that Juanita now has this picture in her little house as a reminder everyday of the young woman who once used that wheelchair.

Colleen the took her outside - we think she hadn't been outside for many years. She was so thankful and all smiles.

She then asked for a cell phone!

There is much more to her story but will have to write about it later.

Back at the school we had lunch (plates of fried chicken, rice and potatoe salad). And of course lots of water.

We stopped working around 2:30 because we had to go the dedication of the Physical Therapy Buliding. That's an entirely new entry which I will have to do a new entry.

Back at the hotel around 5, swimming in the ocean, catching the waves. Dinner next door and our favorite waiter from last year was there - Mr. Dick!